Free monoids and free monads are important concepts to understand in functional programming. A free monoid on type A is just List[A]. List is the single most widely used data structure in functional programming and everyone knows what a list is. But not everyone knows why lists are called free monoids, and what is so “free” about it. And it pays to do so, because understanding what free monoids are about will make the concept of free monads much more comprehensible.

In this post I’d like to explain what free monoids and free monads are to functional programming beginners. I’ll try to explain them in a “free of category theory” way to make it easier for those who are not well-versed in category theory (although it won’t be 100% free). As a result, the explanation will be less formal or precise as it could be, and will be mainly based on intuition and examples. If you want to learn the rigorous definitions, a category theory book could be your best bet.

“Free” in free monoids and free monads is generally taken to mean “structure free”, although I’d like to think of it as “free of unnecessary information loss”. In other words, a “free something” should be the “something” that preserves the most information, or the most general “something”, among all “something”s.

Let’s focus on Int here. What is the most general monoid for integers? It turns out to be (List[Int], ++, Nil) where ++ concatenates two lists. Why? Because it is free of unnecessary information loss, where “unnecessary information loss” here means “unnecessary collapsing of lists”. We can collapse the lists in (List[Int], ++, Nil) in different ways to obtain different monoids. For example, if we add up all numbers in each list in (List[Int], ++, Nil), we get (Int, +, 0); if we multiply all numbers in each list, we get (Int, ×, 1). By contrast, (Int, +, 0) cannot be the most general monoid for Int, because once you collapse 2 + 3 + 5 to 10, the original elements, namely 2, 3 and 5, are gone.

So, this is basically the intuition of what a free monoid is, and why lists are free monoids. In summary, a free monoid is a monoid for a particular set A whose binary operator does not collapse elements unnecessarily (except as required by law), and List[A] satisfies this requirement perfectly. This is, of course, an extremely informal and imprecise description. Next let’s see a slightly more rigorous way of explaining free monoid, also known as universal construction in category theory.

A free monoid for Int, denoted as FreeMonoidInt, is a monoid such that, given any other monoid (A, ⊗, e), there is a 1-1 mapping between functions of type Int => A and monoid homomorphisms from FreeMonoidInt to (A, ⊗, e).

As we can see, it doesn’t matter what (A, ⊗, e) is or what f is. Given any (A, ⊗, e) and any f: Int => A, f always uniquely identifies a monoid homomorphism. Given any list of integers List(x1, x2, ..., xk), this monoid homomorphism maps the list to f(x1) ⊗ f(x2) ⊗ ... ⊗ f(xk), or e for the empty list. It is easy to verify that this is indeed a monoid homomorphism. This is only possible if the binary operator of FreeMonoidInt is free of unnecessary collapsing of elements, so that we can interpret each list of elements however we want at a later time, where “at a later time” means “after given the function f”.

In functional programming, an endofunctor is just a functor, i.e., a type constructor that can map; a set is just a type. So, the main difference between free monoids and free monads is that free monoids are defined on top of types while free monads are defined on top of functors. In other words, a monoid has an underlying set, while a monad has an underlying functor.

Indeed, the join method of a monad is similar as the combine operator of a monoid:

A list is either a Nil or a Cons of a head and tail. In Scala a list can be defined as:

Here’s how we change types to functors in the definition of List to get a free monad:

Putting these together, here’s what we get:

This is exactly the free monad. Following conventions, we use Return and Bind instead of Nil and Cons, hence

In practice, though, the free monad definition you encounter may look different from the one above, for example, this is the (slightly simplified) definition of Free in Cats:

The advantage of this definition is that it is a monad for any type constructor F (also known as “freer monad”), since it is basically equivalent to a free monad combined with a free functor. On the other hand, in the previous definition, Free[F, A] is a monad only if F is a functor. But for the purpose of this post, we’ll stick to the simpler definition of Free.

As mentioned before, the join operation on a monad is comparable to the combine operator on a monoid. So, let’s draw the analogy again between free monads and free monoids in order to understand how join works for free monads. In a free monoid (List[A], ++, Nil), the combine operator (++) concatenates two List[A]s into a longer List[A]. Analogously, in a free monad Free[F, A], we would expect that the join operation should take two applications of functor F, namely Free[F, Free[F, A]], and merge them into a single “larger” application of functor F in a way that does not lose any information unnecessarily.

Unlike the free monoid case, the above sentence can be hard to understand without some visualization, so let’s do that. First, let’s take a look at the definition of join for Free[F, A]: 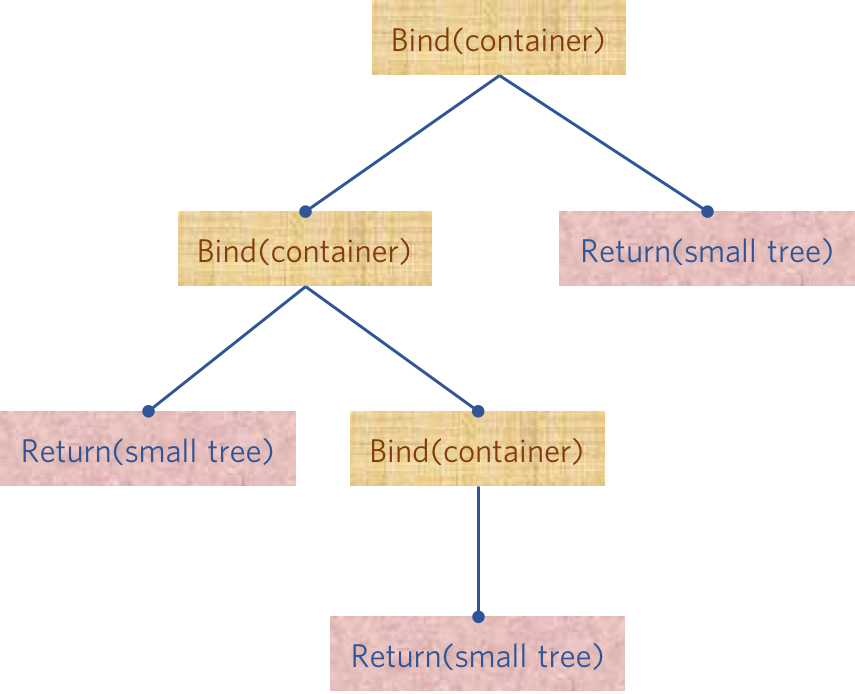 If we take the three small trees in Fig 1. out of the Returns and expand them, we may get the following tree:

Fig 2. A small tree representing a Free[F, A]

As you can see, it is a small tree representing a Free[F, A], and it contains the same information as the big tree in Fig 1. No information loss. This is exactly what join does when applied to a big tree: it takes the small trees in the leaf nodes of the big tree out of the Returns and expands them, resulting in a small tree.

Free monads are widely used to encode a computation involving multiple steps as a pure value. Since the join operation of free monads are lossless (barring the necessary loss as required by monad laws), all information of the computation is preserved in a recursive structure similar as the one shown in Fig 2. This structure can be interpreted in different ways by different interpreters at a later stage.

There is a universal construction for free monads which is similar to the one for free monoids, which can be described in the following way (you can read it side-by-side with the universal construction for free monoids to see the analogy): a free monad for a functor F, denoted as FreeMonadF, is a monad such that, given any other monad G, there is a 1-1 mapping between natural transformations from F to G and monad homomorphisms from FreeMonadF to G.

Since we’ve come this far, I’d like to briefly mention cofree comonads here. With the understanding of free monoids and free monads, it shouldn’t take a ton of work to explain cofree comonads.

In category theory and functional programming, a “co-something” is the dual of “something”, and it generally implies reversing the arrows, and turning sum types (i.e., either A or B) into product types (i.e., both A and B) and vice versa.

A comonad is obtained by reversing the arrows in pure and join in a monad:

A cofree comonad for a functor F is defined as:

The universal construction for cofree comonads is similar to the one for free monads, but with the arrows reversed: a cofree comonad for a functor F, denoted as CofreeComonadF, is a comonad such that, given any other comonad G, there is a 1-1 mapping between natural transformations from G to F and comonad homomorphisms from G to CofreeComonadF.